Witness my Kate’n’Alex story. I was writing happily away (the aftermath of a love scene, hot), my conflict sorted, getting into his introspection about how he cannot possibly want a relationship and then I come up, slap bang against the dreaded ‘why’. Okay, says I, he doesn’t want a relationship because he doesn’t like being tied down. Why? Because his family moved around a lot and he learned never to commit to anything or anyone because he knew he’d have to leave again. Yes, but that’s what he did as a kid – why does he continue this behaviour as an adult? Um…because he just wants to??

Grrrr. See what I mean? It’s all very well having angsty childhood stuff happening, but there has to be a reason for the character to keep acting that way as an adult. Which brings me to finally understanding why a parent cannot be the reason for someone’s internal conflict (yes, I’m slow). A parent can add to it, deepen it, but as an adult, would the character really continue to act the way they had as a child? Especially an alpha male?

So, for Alex, I have to have some reason why he continues to believe the lessons he learned in his childhood. Did he ever try thinking differently? What happened when he did?
I have another hero too who I thought had his conflict sorted. But no. He had a difficult childhood and had issues with responsibility, but again, the difficult childhood seems to be the excuse to for him to continue acting the same way as an adult. Again, I have to ask myself, did he ever try to rise above it? Did he succeed or fail? Why did he fail and how did he feel about his failure?

Argh! Seems you can never stop learning in this business… 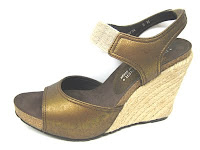 In the meantime, after a depressed weekend where my writing and everything about it sucked, I succumbed and bought some NTAI shoes. Wedges as you can see since I cannot wear heels without seriously damaging my feet.
Yes, they were ridiculously expensive. Yes, they are totally impractical. Yes, they made me stop thinking about my sub for, oh, about five minutes. 🙂

So, anyone else got a handle on internal conflict? What about shoes?