I’ve been putting this off because quite frankly, heroines are not my strong point. I prefer heroes because, well, to be honest, I’m way more interested in him than I am in her. And possibly also because I’m just not very good at writing a decent heroine. I think the only one of mine that I really liked was the geeky heroine in my sadly rejected full. She was lovely. Vulnerable, sweet, but terribly, terribly stubborn. Told the hero he was just a big, fat dirty coward. Loved her. She’ll get her HEA one day but today I’m building my good old Kiwi girl to complement my naughty Frenchman…

Okay, so, my hero wants control in his relationships. He wants this because control quells the fear he has of being abandoned. So in order to really up the tension in this story, I need to give the heroine something that will really conflict with his need for control. And I’m going for independence here. So my heroine believes that independence or self reliance in her relationships is the key to fighting her fear of having love used to control her (backstory alert!). Having love used to control her made her feel she wasn’t important and that her feelings didn’t matter so she definitely wants to avoid this. Yay. Now I have two completely opposite motivations and secret fears here which is great because that’s how I’ll get the greatest tension in the story.

Of course,my problem now is that if the heroine doesn’t want to be controlled, why would she fall for a hero who wants to control things? So I’ll have to give the hero some qualities that she will admire. These qualities will probably be related to her backstory. Perhaps in her past men have been unreliable and let her down, in which case she will admire trustworthyness and reliability. So I’ll make him reliable and trustworthy. Since she values these attributes, she’ll endeavour to make sure she herself is trustworthy too – thereby making her more attractive to the hero because, as you remember, if he thinks she’s trustworthy, she’ll be less likely to abandon him.

Right, so I have some conflict and motivation for the heroine. I’ve got some things for her to admire in the hero. So now I can build her backstory. If she wants independence then perhaps she runs her own company, likes to do things herself. Perhaps she’s also practical and down to earth, good traits when it comes to pricking the arrogance-bubble the hero surrounds himself in. She will also need a spine of steel in order to stand up to the hero’s demands. But that’s okay because as her motivation is independence, that’s totally in keeping with her character – she’s not going to let anyone control her so she will fight him as and when required…
Hey, think I’m getting there. Not a stereotype in sight. And now I’ve got her most basic conflict straight, she’ll act like she’s supposed to and I won’t have to give her extreme character traits to make her do what I want!

At least that’s the plan.

Right, on with the award. I’ve been nominated for a Happy Cupcake Award! Thanks to Maya, Lacey, and Kerrin! This requires me to list 10 things that make me happy. So here they are, in no particular order: 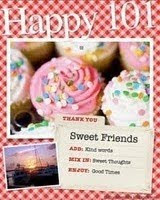 Now I should nominate 10 bloggers who also make me happy but since all of you already have been nominated and you all make me happy, I shall extend the award to anyone who missed out! Enjoy the cupcakes everyone!

Oh and how is everyone else’s heroines getting on? Ready to shoot them yet?? 😉

17 thoughts on “Building a Heroine (and An Award)”