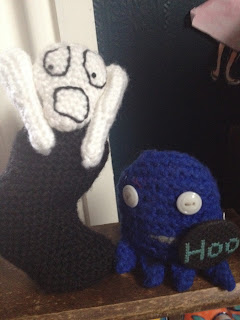 Okay, so the last two weeks have been a total whirlwind.  Three book deal, revisions from Mills and Boon, a contest final, plus another thing I’m not allowed to mention yet, AND my birthday!!  Apart from all the good writing stuff, the bestest present was the crocheted screamer from Edvard Munch’s The Scream. Yes, a totally awesome friend of mine made it – she crochets robots in her spare time – and I think it sums up perfectly my feelings about all of this. In a good way. 🙂 Hoo is also very pleased to have Screamy for a friend. He was kind of lonesome all by his knitted self.

I have to confess it’s been VERY difficult to concentrate on writing for the past week or so. I have to get my head around the fact that not only have I sold one book, I’ve  also have sold two more that I haven’t even written yet!  Which is exciting but also scary. Because it means I now have deadlines to make, the first of which is in October.I’m hoping this won’t be too much of a problem though because while I’ve been unpublished, I did get into the habit of giving myself deadlines, sometimes for a contest, sometimes for my own discipline. I’m also going to have to get my head around the fact that people are actually going to read my writing. Readers! Not just editors! Eeek! Oh well, at least I’ll have a good few months before that actually happens. 🙂

The best thing though to realise has been the knowledge that this is finally my job. I was 12 when I decided that being a writer was what I’d love to be. I never thought though, that at the age of 41 it would actually come true…

Anyway, for those who are interested, I thought I’d share with you my secret tips to getting published:

Do those five things enough times and you’ll get published. 🙂

10 thoughts on “Settling the Dust”