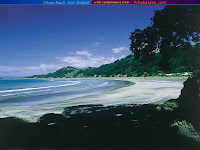 Well, cometh Easter, cometh the holiday. We’re going away to Ohope Beach (see right) for four days. Nice picture eh? It’s a tourist board shot so I’m sure it’s not actually like that in real life – though one can hope. Anyway, it’s not terribly exotic and not something I could use in a Modern Heat story (remember Huntly?), but it will be nice to get out of the city and – more importantly – away from the Phone of Doom and the Inbox of Despair. While away I shall be too busy wrangling small children (we’re going away with friends), drinking chocolate martinis, and attempting to play badminton (hard while you’re holding a martini) to angst about phones or email. At least, that’s what I’m hoping. I’m going to bring my laptop too just in case I get some time or a wild fit of creativity and get some writing in. Probably though, I’ll just end up reading the ebooks I’ve got on it.

I was actually going to do a post like Lorraine’s about alpha males ’cause I thought it was really interesting the comment about how many people seem to have difficulty with making their heroes alpha. I’ve also read various reader comments on different sites about how much they don’t like alpha males. And yet Presents (which is full of alphas) is a top selling category. So really, I was wondering why people have problems with writing an alpha male. Is it personal preference? Anyone willing to share their alpha problems? I had one – Alex, my hero in my competition entry, was apparently not allowed to doubt his attractiveness to the heroine. Which kind of makes sense. Doubting one’s own attractiveness is not an alpha trait.

Okay, so I did end up posting about alphas after all! Ah well, can’t get away from the writing. Hope everyone has a nice Easter!

6 thoughts on “The Alpha and Ohope”