I’m trying to get into writing my Naughty Frenchman but I have to say, I’m having a ‘what’s the point’ week. The waiting is killing me – it always does – and even though I have lots of stories in the works, I’m feeling a bit directionless. I always get a bit like this as things drag on – usually just after submitting I’m fine for a few weeks and then doubts etc start to kick in. Targetting only one line does mean that you can’t do anything else but write while you’re waiting, and yes, writing IS the thing to do, but I can’t help feeling that while it drags on I’m kind of standing still.

At my last RWNZ meeting, people asked me how I was getting on and one person said to me, ‘oh, but you’re nearly there aren’t you?’. Thing is, I’ve been ‘nearly there’ for a whole year now. And in fact, there is no such thing as ‘nearly there’. You’re either there or you’re not. As the lovely Karina Bliss told me, it’s like being pregnant. You can’t be nearly pregnant, you either are or you’re not. I’m not. 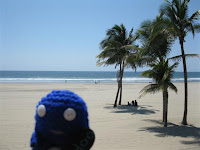 It does not help that Dr Jax is currently gallivanting around Acapulco at a conference while I am at home with the kids. Not that I mind the kids (most of the time), it’s just that I’d rather be the one at Acapulco! Unfortunately my place with Dr Jax has been usurped by a 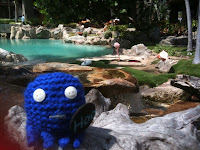 small, blue, stuffed octopus called Hoo. My daughter gave him the toy to keep him company and so far, the wretched thing has seen way more of Acapulco than it has any right to. Witness these pictures. 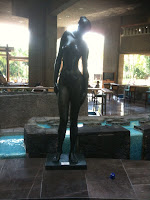 So, while my husband and a tiny blue octopus are having fun in sunny Acapulco, I shall while away the time trying to write Chapter 1 of the Frenchman for the fifth time (yes, it’s taking me that long to get it right! Grrr).

Anyone else finding the NTAI hard at the moment?