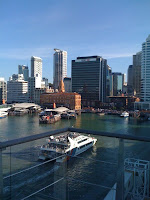 So Dr Jax had a significant birthday this week and I took the liberty of booking us a room at Auckland’s Hilton hotel for the night. I’ll just say this now – it was for his birthday but, obsessive writer that I am, it was also research since the characters of my current WIP also visit said hotel. It was a gorgeous room with views across the harbour (when not blocked by the vast cruise ships that moor alongside the hotel), perfect for my characters – though I think I’ll make the room a LOT bigger. A suite maybe. And yes, I took pictures of both the room and the view to help with scene setting. Like I said, research.

We had dinner at the very swanky restaurant and – here’s another example of just how obsessive I am when it comes to writing – had an unfortunately hilarious moment when the waiter spilled a glass of Moet all over me. And I mean, ALL over me. The poor man was showering me with napkins (after showering me with champagne) and fussing round while I dried my hair with a fourth napkin, all the while thinking, ‘I wonder if I could work this into a book?’. The whole restaurant was gawking at me but all I could think about was writing! And then, when I told Dr Jax that I was thinking about how I could use this in a scene, he asked ‘so what would an alpha male do in this situation?’. And instantly I was thinking constructing a new story…

So, thank you clumsy waiter at White restaurant. Your waiting skills leave a lot to be desired but at least you’ve given me an opening scene for a new book. Heroine gets expensive champagne spilled on her in a swanky, upmarket hotel restaurant. She’s utterly soaked, horribly embarassed, and along comes the hero and….??

What do you reckon? What would an alpha male do?

25 thoughts on “What Would An Alpha Male Do?”