I feel a bit like Michelangelo trying to carve out David from a block of stone at the moment. I keep chipping away thinking I see the figure inside, but then realise that my David looks more of an ogre than a svelte young man. All the proportions are wrong and he’s wearing clothes instead of a fig leaf. So I have to do some more hacking, some more cutting down and polishing. I’m hoping it’ll be worth it.

Currently my Chess masterpiece is becoming the new never-ending story. A month and a half on the first three chapters. Longest. Time. Ever. And you know what? I think I may have to can those chapters. Why? Because they are based on an earlier incarnation of the conflict and now do not have any relevance to the rest of the story. They involve the heroine and hero working together. But they never work together again and their conflict is not based on a work situation. So why have I still got them working together?? How does it forward the conflict? It used to, but since I’ve fiddled with the heroine’s conflict, it doesn’t anymore. Argh!!

Sigh. This is becoming a watershed ms. I think I’ve learned more writing this than I have any other story. More about my process, more about what I’ve been doing wrong in previous stories, and more about how to fix the things I’ve been doing wrong. At least, I think I’m fixing things. I could be making it worse of course but the only way of knowing that is by sending it away. But I can’t do that until I finish the damn thing.

This is why fixing an old ms can be harder than just writing something new, especially if the problem was character and conflict. I mean really, given the amount of rewriting I’ve been doing, I’ll just say that in fact, this IS a new ms. Because changing a conflict or changing a character can have wide-ranging effects. A character that acted one way in the beginning, may not act that way after the change. And if the plot is based on what the character does – which is most category – then what the character does will in turn change the plot. Can anyone say nightmare?

Anyway, what else can I do but keep chipping away? And hope that soon my ogre will start looking less like this: 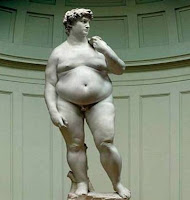