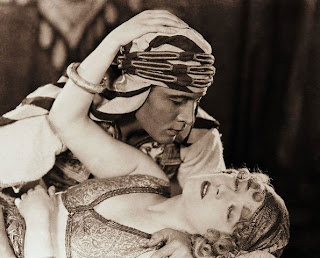 When I was at university, I got through my English degree with a healthy dose of Mills and Boon. Shakespeare and Chaucer and Dickens and Bronte were leavened with lots of billionaires (or millionaires since a million bought you a hell of a lot more then than now!). But back then I was most particular about my heroes. I didn’t like Mediterranean heroes and I didn’t like sheikhs. I used to find them ridiculously over the top and one things was for sure, even when I thought I might give romance writing a go, I swore I would never EVER write one.

In my quest to challenge myself, I’ve decided to tackle a sheikh. When I announced this to some dear friends of mine (you know who you are!), one of them in particular could NOT get his head around it (he is a guy so fair call). He had many questions, all of which stemmed from the most basic of misunderstandings – why would anyone find a sheikh sexy? Of course, he’s thinking real life. But these stories are NOT real life. They are fantasies. And for many women, a sheikh is the ultimate fantasy.

So I figured out a premise and considered my sheikh. Dark? Check. Alpha? Check. Brooding? Well, I tried to make him brooding. I really did. I wanted him kind of harsh and angry because that’s what sheikhs are, right? Except Sheikh Fred (as he came to be known) wouldn’t. He kept kind of morphing from Angry Sheikh into Amusing Sheikh. I did have to consult the inimitable Ms Yates who is experienced in all things Sheikhy and she suggested I let him do what he wanted to do. You’d think I would have learned about not imposing what I wanted on my characters but noooo…. Anyway, so it seems that this hero is not to be a dark, brooding, ruler of a mysterious desert desmene. He’s to be a wry, amusing, charming ruler of a mysterious desert desmene.

I don’t know whether this will work. It could be that this is my point of difference on the sheikh story (I’m not saying there aren’t other sheikhs like Fred out there though). It could be a terrible travestry. However, I DO know that underneath he IS dark. He’s got major issues. He just covers them with an amusing front. Which kind of makes it darker in a way….

So, anyway, back when I first read M&B, the heroines in sheikh stories tended to be ingenues thrown onto the mercy of this powerful, brooding king. I get that part of the attraction is the heroine being totally out of her depth but – again in my quest to do something different – I didn’t want to do that kind of story. What I wanted to write was about what would happen if an alpha male was given an alpha female for a heroine. A woman powerful in her own right. So I thought I’d make Mable (my heroine, and no, her name isn’t really Mable) be an incredibly successful businesswoman. But not at something traditionally ‘female’ like interior design or whatever. I wanted her to be powerful in a man’s world. So why not an oil baroness (my friend couldn’t get his head around this either. No, I know there are no women oil barons and I know the oil industry doesn’t work that way but, hello!, fantasy here!)?

Of course, what they do isn’t really what’s important. What’s important is who they are as people and how they overcome their various issues in order to find happiness. The sheikh part of the equation is just window dressing.

I’m going to have fun with my window dressing though, that’s for sure. So anyone else tackle a trope or a genre they’ve always sworn they’d never write??