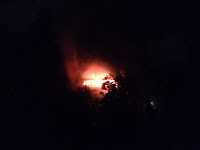 A few people have said that I’m on fire recently and I graciously took the compliment, feeling pleased with myself. Little did I realise that that my hotness would soon spread to other areas – namely Dr Jax’s man-shed. In other words, we had a fire last week and poor Dr Jax lost his shed.

I’d come home late from seeing a friend and the hubs and I were cursing the neighbours party because it was loud and we wanted to sleep. Then there came a hammering on our back door. Thinking it was the neighbours being drunk and obnoxious, Dr Jax sallied forth to tell them to get lost. When he didn’t come back inside I thought it was odd. Then I heard crackling. I went to the back door and well….there was his shed down the back of the garden, flames shooting out of the roof!

The neighbours far from being drunkenly obnoxious were hammering on our door to tell us the shed was burning down and they’d called the fire bridgade. 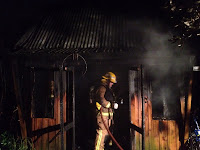 It was actually pretty bloody scary. The firemen seemed to take forever to get to our house and in the meantime Dr Jax had got out the garden hose and was waving it futilely at the flames. But by this stage the trees were alight and we needed some big blokes in firemens outfits with big hoses (no double entendre intended hehe). 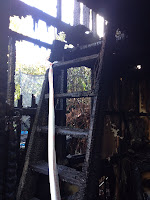 Eventually the firemen came but it took them a good 30 minutes to get the fire under control and then another couple of hours to make sure it was fully out. The neighbours hung around and took videos on their phones (as you do) while I angsted about the huge wooden chest of photos – 20 years of them – that was on the mezzanine floor of the shed. No doubt lost, I thought. Until the firemen hauled the chest out, charred and burned, and opened it up to find all the photos completely perfect (except a little water damanged).

Anyway, the fire inspector seemed to think that the fire had started with a laptop that had been left on. Not quite sure how it had spread, whether it had sparked or burned the desk underneath where it was sitting, but I guess that’s something we may never know. But you know the first thing I did while the firemen were putting out that fire? After thanking God that no one was in the shed and that our kids were safe (they slept through the entire thing) I ran up into our house and quickly emailed the WIPs I’d been working on to my Gmail account! You can tell where my priorities lie right? 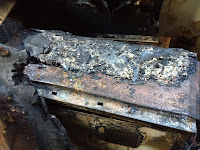 Did get me thinking though. Dr Jax lost his computers – this photo to your right is the remains of one. The charred stuff on the top is the keyboard. But the majority of the important documents on them had been backed up to our home server. But then, what if it hadn’t been our shed that burned down? What if it had been our house and the home server with it? That would have been a whole other story but it just goes to show that sometimes even backups to home servers or to memory sticks or discs can be lost just as easily as if your work was on your computer. 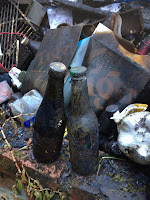 I think the best answer to this is cloud storage. Which is why I now make sure to back up my files to Dropbox – also very handy when swapping files between computers. Backing up is very easy, especially when the alternative is losing all your writing… The trick is remembering to do it.

Anyway, that’s my excitement for the week. Time for a beer! (yes, those are beer bottles that somehow survived). Anyone had a similiar experience?