It’s a wonderful book so if you need a bit of Xmas cheer this season, or just need a fabulous, fun and romantic read, head over to Carina Press and buy this one!

See below for an excerpt and links! 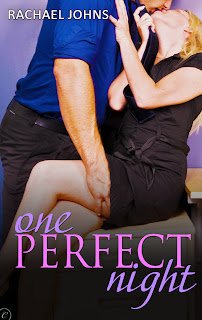 Excerpt from One Perfect Night
“Don’t look now, but Mr. McSexy just entered the building.”
“Blast.” Peppa Grant spun round and did exactly what her best friend and colleague Izzy had ordered her not to. Her breathing faltered at the sight of six foot plus of unadulterated male who now towered at the entrance to the company’s function room. An anxious hush fell over the previously buzzing room. As all eyes snapped to him, she tried not to quake in her costume’s fairy shoes.
Until half an hour ago, Cameron McCormac had meant nothing more to Peppa than the new name at the very top of the office food chain. Now he was the man who owned the car she’d sideswiped in the car park tonight.
The dangerously handsome man who was making her pulse spike simply by standing in the doorway. “Oh, God.”
As Peppa pushed her barely touched glass out of reach and let her head fall onto the table in front of her, Izzy giggled.
“It’s. Not. Funny,” Peppa declared when she finally looked up. Her eyes sought the company’s new CEO again and she felt her heart collapse into her stomach.
“You’re right,” Izzy said, reaching out and stroking Peppa’s hair like a mother over a sick child. “If I’d just put a prize-winning dent in the big boss’s red, convertible pride and joy, I’d probably be at Sydney airport boarding a plane or planning to hitch a ride with Santa back to the North Pole.”
“Hilarious.” Peppa shot her friend a sarcastic smile. “Please tell me McSexy has just vanished up a chimney?”
Izzy took a sip of her chocolate mocktail, her sea-blue eyes sparking with laughter as she peered theatrically over Peppa’s head. “No can do. Looks like he’s doing the rounds, handing out candy canes or something to all the children. Molly must have put him up to it.”
Molly, although old enough to be his mother, was Mr. McCormac’s personal assistant. Rumor had it when he did anything remotely human, she’d put him up to it. She’d been with the company longer than anyone and was the brains behind this event, the annual Christmas party for children of Lyrique Recordings’ employees. Peppa had a fleeting fantasy of leaving a message with Molly about her little misdemeanor in the car park but that wouldn’t be right. And she hadn’t been brought up to take the easy option.
“I’ll do it now,” she said, resting a hand on her queasy belly as she pushed herself off the stool and onto quaky feet. Although whether her shakiness was from trepidation or her gorgeous boss’s sexy gait and air-of-confidence, she couldn’t be sure. “Confess before I’m due on stage and then, if he has any sympathetic bones in his body, he’ll let me entertain the kids before the crucifixion.”
“You’re such a drama queen,” sighed Izzy. “The top job pays well. He has enough money to line his undies drawer in gold. You apologize. You give him the details of your insurance company. You get on with your life. Simple.”
Simple. Right. But Izzy didn’t know that Peppa had just switched to a budget insurance provider. As she had never needed to claim in seven years of driving, the switch had seemed a good decision at the time. The upside was low monthly rates. The downside? A mammoth deductible on claims.
Well, that faux-pas may not only have cost Peppa her car and her job, but paying back the damage to the boss’s vintage Lamborghini would seriously endanger her ability to pay her mortgage. Not to mention she’d have to put her plans for an overseas holiday on hold—a holiday that had been all about helping her mind and emotions recover from the battering of the past few months.
“I think he’s looking at you.”
Izzy’s words broke Peppa’s reverie. And of course she looked up, across the room, only to find her gaze colliding with the Head Honcho himself. Her heart hitched a beat. Despite the distance she could see the roguish tilt of his lips, the slight frown of his distinguished black brows and that his devilish licorice eyes were trained on her. Dark-chocolate hair, speckled with naturally sun-kissed spikes, framed a face so chiseled it could have been carved from stone. A man so in-control of his world he had no reason to question it. Heat flooded her cheeks and, not wanting to draw unnecessary attention, Peppa forced herself to break her gaze.
If you’ve enjoyed this excerpt, you can read the first chapter of ONE PERFECT NIGHT at Rachael’s website: http://www.rachaeljohns.com/pages/bookshelf.html
Or, you can buy the book at Amazon (http://www.amazon.com/One-Perfect-Night-ebook/dp/B005Z1CF2A/ref=sr_1_1?s=books&ie=UTF8&qid=1321790650&sr=1-1) or Carina Press (http://ebooks.carinapress.com/262D0727-23A2-4E9D-B75E-249FF29C76DF/10/134/en/ContentDetails.htm?ID=5BB8BC4C-4898-4073-8306-FECF92B5DC5B)
And to celebrate her debut release, Rachael is blogging today at the following places, giving away a copy of ONE PERFECT NIGHT at each spot:
·         Get Lost in a Story (http://getlostinastory.blogspot.com/_
·         Chick-lit Central (http://chicklitcentraltheblog.blogspot.com/)
·         Novel Thoughts (http://novelthoughts.wordpress.com/)
AUTHOR BIO:
Rachael Johns is an English teacher by trade, a mum 24/7, a chronic arachnophobic, a supermarket owner by day and a writer by night. She rarely sleeps. Rachael received The Call from Angela James telling her Carina wanted to publish her book on April Fools Day and, when she told her friends, half of them wondered if it was a big joke. Luckily it wasn’t. As an active member of Romance Writers of Australia, Rachael has finaled and placed in a number of romance writing contests. Each success is uplifting and publication is her dream but even if none of this happened, she’d still write. It’s a much better option than ironing, which she refuses to partake in. Ever.