So, did I have any goss from the Aussie conference? Not as far as hot M&B goss goes and believe me, my ears did a lot of flapping. 🙂 Dianne Moggy, the Harlequin VP, gave a great talk about how well Harlequin was doing and did mention a new line that had a ‘broader editorial direction’ but there was no further info about that. I wondered if it was Riva she was talking about. Certainly the news I heard about Riva is that no one knows quite which direction it’ll head in. Which, like I said in my previous post, is actually quite exciting. As far as I can tell, the same editorial guidelines remain in place but I reckon if you make sure your hero is alpha, your conflict is internal, and your story is character rather than plot driven, that does leave you with a lot to play with.

So what else? Editors were all saying ‘we don’t know quite what we want but we’ll know it when we see it’ which is – as always – very helpful! 🙂 The agents there made a good case for getting one. I wasn’t thinking about an agent as Harlequin’s contracts are all boilerplate but then again, an agent can help a little with nudging when you’ve been waiting a while. Very tempting to me at this particular point in time but from what I’ve heard, getting an agent is even harder than getting published so I don’t know.

Went to a great discussion panel with lots of Blaze/Presents/Desire authors who were just a bunch of fabulous ladies. I asked a question about settings for Blaze and whether locations other than North America were acceptable and this seems to be okay, with the proviso that Blaze sells to a primarily North American market so nothing that’s way too different. I also asked another question about acceptable language when it came to – ahem – love scenes. Seems to be what one author can get away with, another can’t. All up to the editor I think. Best quote about that came from Sarah Mayberry who said that if you’re going to use an expensive word then make it count!
Interesting since, in my opinion, MH heroes are supposed to be younger and I don’t know about you, but all the young guys I know do not say, ‘oh bother’ when something isn’t going their way. Even damn is waaaay too wussy. 😉

I did get to speak to some other authors though, who were all without fail very, very lovely. One newly sold author had been writing and submitting for eleven years before she made her first sale this year. Each step on the request/revise process took six months. So I stopped whining pretty quickly. 😉 But her advice? Same advice as Hoo gives out and what I tell myself the times I’m not throwing myself on the ground in a tantrum – never, ever give up.
On that happy note, I leave you with a few more piccies: 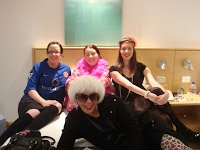 Here we are in our finery for the cocktail evening. Becca, Rach and Janette are at the back while Miss Thing (moi) there is lolling at the front. 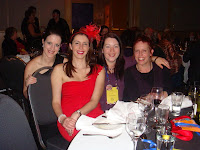 On the right is the Leah, Janette, Rach looking very glam, and some old biddy who decided to get in on the act. 😉 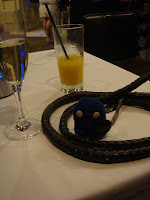 And lastly, just in case you were thinking of giving up, here is Hoo. He’s got a whip and he’s not afraid to use it!

12 thoughts on “More on Sydney”