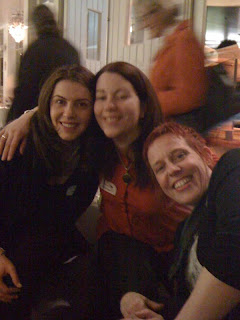 Or Sudnuy (if you’re a Kiwi). But, anyway, main thing is, after a fabulous week away in Australia, I’m back! Was hoping to post while I was away but was seriously hampered by the lack of decent wireless. What’s up Australia? It’s as bad as Kiwi-land and that’s saying something. 😉

Did lots of sightseeing stuff with the family (and that was very cool) but definitely the highlight was the RWAus conference in Sydney. And the best part of that was meeting up with two of my CPs, the wonderful and very talented Rachel Johns and Janette Radevski. Honestly, these are two fabulous women and meeting in real life was just such a wonderful thing. I also got to know some other extremely talented ladies such as Becca Heath and Leah Ashton, plus a whole lot of other wonderful women who write and love category. As you can see from the rather blurry photo of Janette, Rach and myself, many martinis were drunk… 😉

The conference was also a fabulous opportunity to meet some truly wonderful authors. I got to speak to say hello to Kelly Hunter who is one of my favourite Modern Heats authors. I asked her what she thought about the changes coming up with the new Riva line and she thought it was exciting, a chance to do something really different. Scary, yes, for those of us who have followed the guidelines faithfully but personally I really like the thought of doing something different. It’s certainly a challenge – one of the big things that most people at the conference agreed was that writing category was an artform. 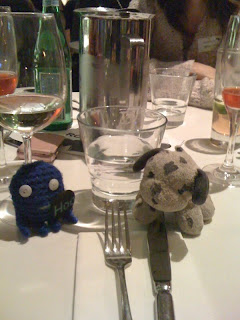 And if course Hoo came too – he wouldn’t miss it for the world. Here he is at the dinner with Oppo, who is a great friend of Becca’s. Hoo and Oppo spent all night talking to each other – couldn’t drag them away.

Lastly, because there is more but I’m tired and need to go to bed, I’ll leave you with a wee pic of myself in my hastily pulled together cocktail evening costume. I’d heard the Aussies go all out and since Kiwis don’t really do the dress-up thing much, I thought I’d better make an effort. So after a dash around Paddy’s market, I threw together a look that was supposed to reflect Fantasy Island or your own private fantasy. I don’t know quite what I was trying to achieve here – Debbie Harry crossed with Jackie Collins I think – but all were agreed that the wig was a hit. 🙂 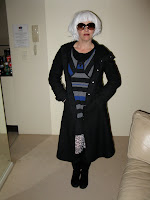