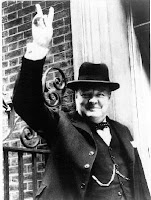 Thanks Winston. So why am I fighting? Well, my last post was grade A whine material. Now, I was going to apologise for that but I figure part of waiting – for me at least – involves a minor vent and/or whine every now and then, and that was my whine for January. I’ll be allowed one for Febuary but I’ll give myself a bit of time to build up to it. 😉

Anyway, the fighting speech is mainly due to a lovely comment Natalie Anderson left on my blog in response to said whine. In fact all of you who read my monotonous musings left great comments, for which I think you very much, but it was Natalie’s that really got to me. ‘You’re a fighter’ she said. Thanks for the reminder, Natalie! Because you’re right. I am a fighter. I don’t like letting things alone or letting things go. I hate stuff getting the better of me. Especially stuff I’m good at! And if there’s one thing I have learned over the Year of the R (2009) is that I can write.

So, forwith the Battle Plan:

1. Strategically attack and conquer Laurie Schnebly Campbell’s Plotting for Motivation course this month.
2. Decimate current WIP by finishing the rewrite and then beat into submission the partial.
3. Cunningly deploy my forces to surround the current crop of new story ideas, winnow the wheat from the chaff, sort out the men from the boys, and decide which WIP shall be the new WIP.
4. Sack and burn the city of TAI, sowing the conquered ground with salt so that NOTHING shall grow. Build new city called NTAI of which I shall be the supreme ruler.
5. Eat more Kohu Road dark chocolate icecream.
6. Storm Kohu Road icecream company, secure ALL their stocks of dark chocolate icecream and enforce martial law whereby they will have to make dark chocolate icecream for me alone.
7. Send out spies for a reconnaissance mission to the London offices of Mills and Boon.
8. Lay out honey traps using Kohu Road dark chocolate icecream.
9. Wait for the editors to fall for said honey traps and the watch the contracts to roll in.
10. Become supreme ruler of the world.

Okay, so there’s a bit of a jump between numbers 9 and 10 but it’s doable, right?

21 thoughts on “We Shall Fight”